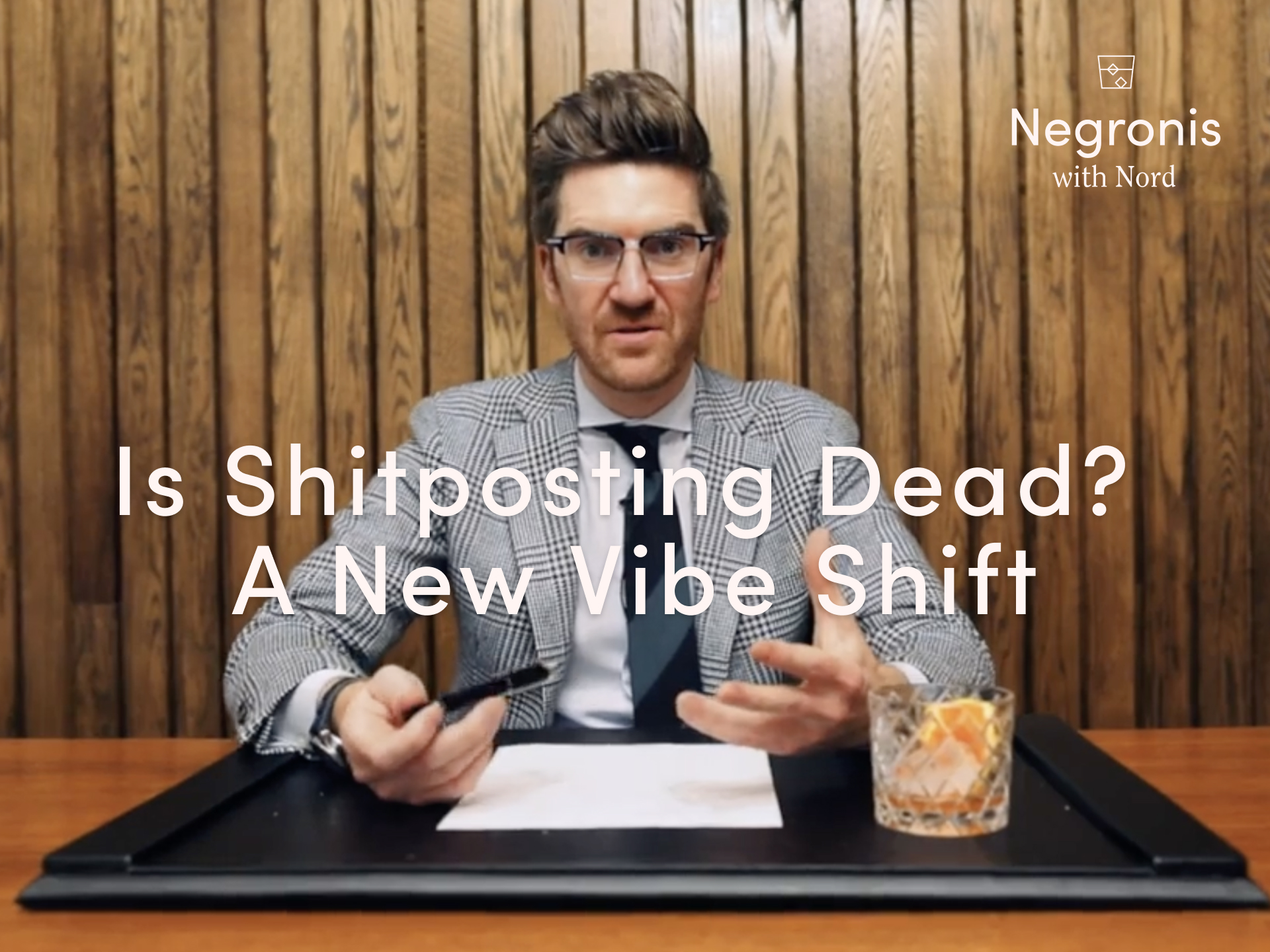 Welcome to Negronis with Nord. Today’s episode is about keeping up with cultural vibe shifts and an existential question: is shitposting dead? Each episode will focus on your most pressing questions about the space. You can submit your questions here.

James Nord: Welcome. Negronis with Nord, episode number nine. Today is a little different. This is like a op ed. Today, I'm not going to give you any advice. If you came here for advice, you're probably barking up the wrong tree today. A quick few notes here before we jump in one, wherever you're listening to this or watching it, you should subscribe to the podcast or to the YouTube. As always, you can drop questions in. I will answer those questions. Also, as we talked about last week, Sephora squad applications are open. If you haven't applied, I don't know how many times I have to say it, but I will keep saying it till the applications close, you should absolutely apply. Applications are open until April 6th. So there is still time to get your application and get your testimonials in. I was at Bemelmans last night in the Carlyle Hotel, and it has me thinking about something that's been bubbling up that I'm going to try and kind of articulate what it means I think for influencers, which is this idea of a vibe shift.

Two or three weeks ago, The Cut had an article about a vibe shift was coming and will any of us survive it? Vibe shift explains the cultural currents, moving in a different direction. Culture is constantly shifting. We talk about this all the time. It's what makes your job as an influencer so difficult. It is hard to stay in front of culture, and it is hard to understand where it's going to go. Often it's probably more difficult to understand where culture's going to go than trying to identify early when it's changing. That's what this article was about. It was kind of saying that there was this emerging trend that felt like was the end of one thing and the beginning of another. It also relates, I've been reading some books by Chuck Klosterman, one called What If We're Wrong? and one called The Nineties.

What If We're Wrong? is all about challenging the deepest held beliefs that we have and understanding that the things that we currently today understand to be true and immutable truths in a couple of generations will probably be proven completely wrong. And The Nineties was about unsurprisingly the 90s, and he was talking in it about how decades don't start and end along numerical lines. I think what we're experiencing right now is probably the true start of a new decade. COVID was its own thing, continues to be, right? The world is still changed, but I actually don't know that like the decade started when COVID broke out, but maybe now is a truer kind of demarcation of when this new decade started. And with it, this vibe shift. Basically what it's saying is the new vibe is much more about partying and going out and being debaucherous and kind of the roaring 20s thing that has been brought up that people thought might happen coming out of COVID.

And I think that was the idea of shitposting was that like, I am not trying hard and I'm not putting any effort whatsoever in. And that was I think, held up in esteem after years and years in influencer, especially in the influencer culture of trying really hard, putting together editorial shoots and shooting on DSLRs. And everything being perfect and retouched and you're scouting locations and people just got sick of it. I think we might be seeing the end of shitposting as well. And it's tied up in this vibe shift. And again, I am not a cultural commentator by any means. I'm not a trend forecaster. So I can only I think, speak to what I've seen anecdotally. I think the first time I remember hearing about this new vibe, actually my fiance who follows Shea Marie was saying how all of her photos got really dark, pulling the exposure way down, even in the daytime photos. And they were like gloomy, a lot of them were blurry and a bit more glamor, something that we had kind of missed and certainly was completely antithetical to the like shitposting trend.

How am I seeing this play out? One, we had this idea of this super curated feed. Then it went to just being more natural and in the moment, then it went shitposting and now it's going somewhere else. Exercising is a big part of my life. I exercise five or six days a week. And I feel like some of this is a rejection of wellness. Instead of talking about your gratitude journal and meditating every morning, people are talking about the glass of wine they have when they get home or the steak that they ate. Smoking cigarettes, which we have not seen on social media in a very long time. While the tone of the last few years was pretty pessimistic, that things are just getting more optimistic and the content that is doing well, that I see anecdotally, I don't have data on this yet, like has more joy in it. It's people laughing, it's you jumping into a pool with a dress on or something, right? There's these moments of kind of frivolity that have come back.

And we talked about this at the beginning of the pandemic, right, that like frivolity, like people didn't want that. They wanted substance. They wanted you to share educational information and talk about the myriad societal and cultural issues. And there's still a lot of that, right? But I think that people are craving joy, and happiness, and spontaneity in a way that they weren't before. And we have come to a place where we have to acknowledge the suffering in the world and do what we can to in some way, help diminish that suffering. But also that there is this desire for joy, that we don't have to self flagellate ourselves in our apartments, that we can go out and have a good time.

From DSLRs, to iPhones, to Polaroids

From an aesthetic standpoint, again, it was all about DSLRs and then it became all about iPhones. And now we're seeing this shift to film. I'm seeing new influencer, it seems like every week who's buying a film camera, they're going out with a disposable camera. My 18 year old niece, the other day came on a vacation and had a camcorder with her, which was crazy. A DSLR says, I am going to stage a moment. The iPhone is like, I am just going to document my normal everyday life. And I'm just going to pick 10 photos at the end of the week and post them. And I think this push to film again, has optimism in it, right? It says that like, I think something is going to happen that I'm going to want to document. I'm bringing a camcorder because I think something interesting is going to happen and I'm going to want to film it.

I'm bringing a disposable camera because I want to be able to capture this night in a different, more permanent way.

What this means for influencers

What this means for influencers, I don't think you need to change your content to match the burgeoning mood of the internet that a couple media nerds in New York have said, Hey, this is where culture is going. But I do think there is the mood of the country and certainly of youth culture right now feels like maybe we're less concerned about calories than we are about having fun, creating memories, being spontaneous, living and letting go and allowing yourself to do things that are maybe unhealthy or irresponsible every once in a while in pursuit of enjoying the time we have on earth. I think if anything in the last couple of years, and certainly what's going on in Ukraine right now has taught us anything, is that your life can change overnight.

Part of that acknowledgement and going through terribly difficult few years is this desire to enjoy the time that we have more fully. So while there's no tangible to dos after this video, I think that keeping your eye on this trend, it probably behooves you. This might be the direction culture is going in. If we come out of this with a more intimate understanding of how brief our time on earth is, and also a deeper understanding of the privilege that we have and the plight of everybody else in the world. And we use those platforms to try and make changes in that place, but also use those platforms to celebrate that time that we do have and enjoying it and kind of ringing every drop out of life that you can. I think that's not really a bad outcome and something to keep track of. We will be back on questions next week. So as always, if you have any drop questions in the comments and we will answer them. Yeah. I know.