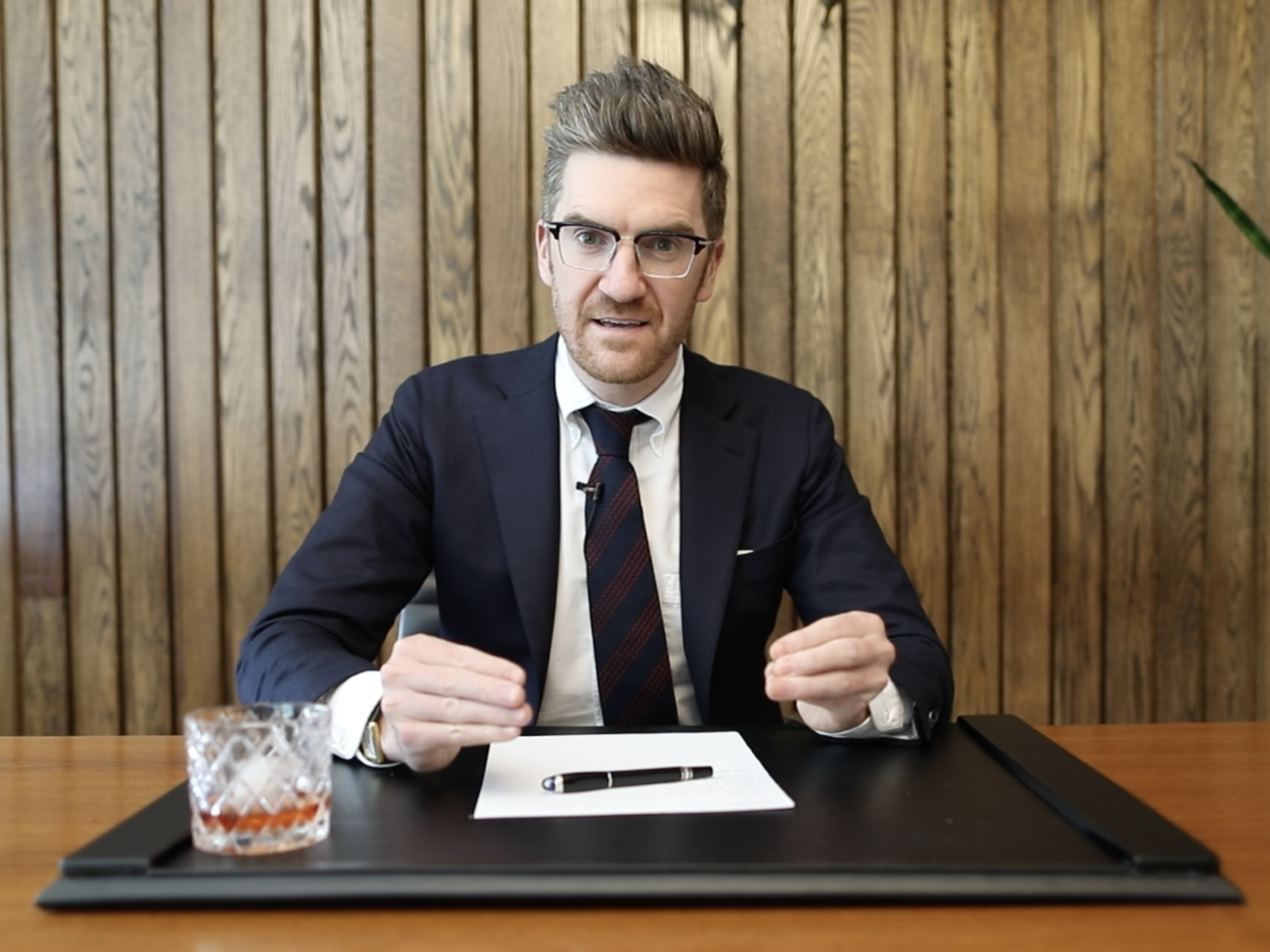 Welcome to Negronis with Nord. Today’s episode is about TikTok and how it’s changing the norm of social behavior, plus the way we consume & create content. You can submit your questions for future episodes here.

New York is Back!

James Nord: Welcome Negronis with Nord episode number 14. It is another week. We are still in the depths of an unending winter. The wind is howling outside and we may never escape the hell that is New York City. Speaking of New York. This actually is just like a very New York thing that happened to me today, which is my assistant called me, said that somebody had gone under my car and sawed the catalytic converters out from under the car and stolen them, which is apparently a thing that's happening in New York right now that people are going around with like handheld battery-powered saws and cutting off and stealing people's catalytic converters. So, and you know, I couldn't even really be pissed. I, I have to respect the hustle of New York City to come up with just like such an incredibly niche thing to steal from me. And it feels like New York's back!

TikTok is not a social media network

James: Look, we're gonna do something a little different this episode. What did we talk about last week?--About how these platforms are changing?--We talked a bunch about how the market was changing and how the expectations for influencers are changing. And, and it has me thinking about ever since we started this show back up, we are talking a lot more about this because I'm, I'm having conversations with influencers all the time who are frustrated and confused. This isn't how it used to be. And it's so much harder. And is it, is it the algorithm? Is it something else? They just feel like something's different. And I read two interesting articles recently that illuminated some, some points for me, it feels different because it is really different and it's bigger than the algorithm. It's bigger than maybe even just culture changing its taste a little bit, you know, the end point we're getting to here to give you a preview of where we're going.

Is this idea that TikTok is actually not a social network at all. I had never taken it to that next step to say this actually fundamentally is not a social media network, but it is a way to deliver hyper-curated entertainment directly to a user at a speed and volume that we have never experienced before in our lives. To treat it like a social network work and to think about it like a social network is fundamentally wrong and leads you to misunderstand what the platform is and how it works and how you can be successful on it.

The evolution of social media

So let's step back and kind of work towards that. So as we think about the history of social media, you think about MySpace, Friendster, then Facebook and Tumblr, all of these things, right? They were a natural evolution of faster, you know, more effective ways to communicate, right?

You had the U.S. Postal service and then you had phones and then you had email and then you had texts and now social networks gave you this way to stay connected with your friends, right? I mean, that was the initial point of Facebook. Texting 500 of your friends, an update that you had a baby, or you got a new job, whatever you're on a vacation, that was difficult. But Facebook gave you this kind of new way to do that, and it brought us closer to the people that were most important in our lives. I read this article in The Atlantic, which we can, we can link to. You should all read. It's really interesting. The premise was more political, but it talks about the shift in these early days of social media. That was all about connecting with friends and when the like button was introduced and the share button and when algorithms started to be introduced, the platform changed from this place to connect with people that you cared about in your life, to a place where you would put on some kind of performance and be rewarded for that.

Social media as a performance

You know, it's a fairly simple idea, but for me, I found it really impactful and an impactful way to think about how things have changed. And if you think about how social and content and content trends have changed, we're moving into this place where it is the most edgy or out there, or strange or niche content that is getting attention. And that the stuff that feels kind normal, right? The stuff that like used to be the majority of social, which was sharing your life, talking about the things you're interested in, that stuff, just isn't doing it as well, right? Because it's not a performance. It's just you sharing things that you like, it's you sharing a bit of your life. If that life isn't dramatized and over the top and all these things, it's, it starts to, you know, it's not doing as well.

And again, I think that idea of training and how it is training the users on the platform, both in creating content and consuming, is a really powerful way to, to look at the space. Because again, we're not gonna go back to a place where the kind of content that worked in 2015 still works today. We have walked down a path. I think that we can't turn around from, I was making a joke with a potential client about, and I was just saying, how back then, like 2008, it was a weird thing to put shit onto the internet. And even my friends all made fun of me 2012, 2013, 2014. Most people weren't documenting the minutia of every single day of their life. So that was, that was new. And it was exciting. And you could just share what you were doing, where you were eating, what you were wearing, and that was enough. But then it stopped being enough because people had seen it, over and over and over and over again.

And we needed something else to like give us that hit. I think the people who grew up in an internet that was a bit more down to earth and a bit less of a performance are having a hard time transitioning into this new version of the internet. And if you can think about video, if we frame it as a performance, well, video is a much better medium to perform. It's much easier to put on a performance, through a skit, through a video than it is through writing and posting a still image, even harder, you know, a full blog post. It makes sense as what we crave is entertainment and performance that we are moving to video. And that brings us to the idea that TikTok is not in any way a social network. You know, when you open TikTok, you, aren't looking for updates from your friends and, family, and colleagues, but you're looking for the best content for you in that moment.

It changes the motivations. It changes the way we create content. It changes what becomes popular. The simplest idea to think about with the TikTok algorithm is if this performs at a certain level in front of this test audience, if generally your content is viewed or liked or commented on by 10% of your audience. And all of a sudden you just posted something that, that 70% is, we're just gonna fucking throw it out there, you know, and we're gonna show it to everybody. And this is a real concern I have for the influencer space as TikTok becomes more dominant. We are no longer rooting our content in creating value for our followers. We are doing it in trying to go viral. Once we get a taste of that and we go viral, we are just going to, again, not be looking to our audience and saying, what can I do?

We are no longer rooting our content in creating value for our followers. We are doing it in trying to go viral. - James Nord

What, what can I create that will be helpful for them, but I need to, I need that hit again. I need this to go viral again. I think what is scary is that again, what is going viral is oftentimes something with like conflict in it. You're calling somebody out, creating drama. People love drama. Or, this thing that you're sharing are the things that piss you off. You know, the things that you disagree with. We're flooding these platforms with content that is meant to try and reach unnamed, faceless people that we don't know anything about rather than content that is going to be helpful for your audience. And it is why I think here we are bullish about TikTok and we are focusing a lot of our efforts and building technology and doing all the stuff to support TikTok and we're excited about it.

But I do think the thing that is scary is this idea that, that we're no longer rooted in, or in service of our following, but we are in service of this algorithm instead. And we are in service of trying to gain virality. And I think that changes again, the way you consume, the way you create and the norms of these platforms. And again, if we think about Instagram, it's still largely an app that you open up to see what your friends are doing to see what your colleagues, you know, influencers you like, et cetera are doing. But TikTok is an app that you open up to watch videos or to get your videos watched. That's it. Influencers, people that work on the brand side, all need to think about and consider. And again, I don't have any big answer here. We are still very bullish on Instagram.

We're still very bullish and excited about video generally. Um, this is more my personal journey in trying to understand what is changing in this industry and where that leads us in five years. So I would, uh, love to hear y'all's thoughts on this. You know, we're gonna post these two articles that kind of sparked some of this thought for me because, uh, the writers there have done a much better job articulating it and, uh, were what sparked these thoughts in the first place, but love to hear your thoughts and, and we'll get back next week to giving you actionable advice. Um, but you know, always good to sneak an op-ed episode in every once in a while. So thank you for listening. We'll see you next week.