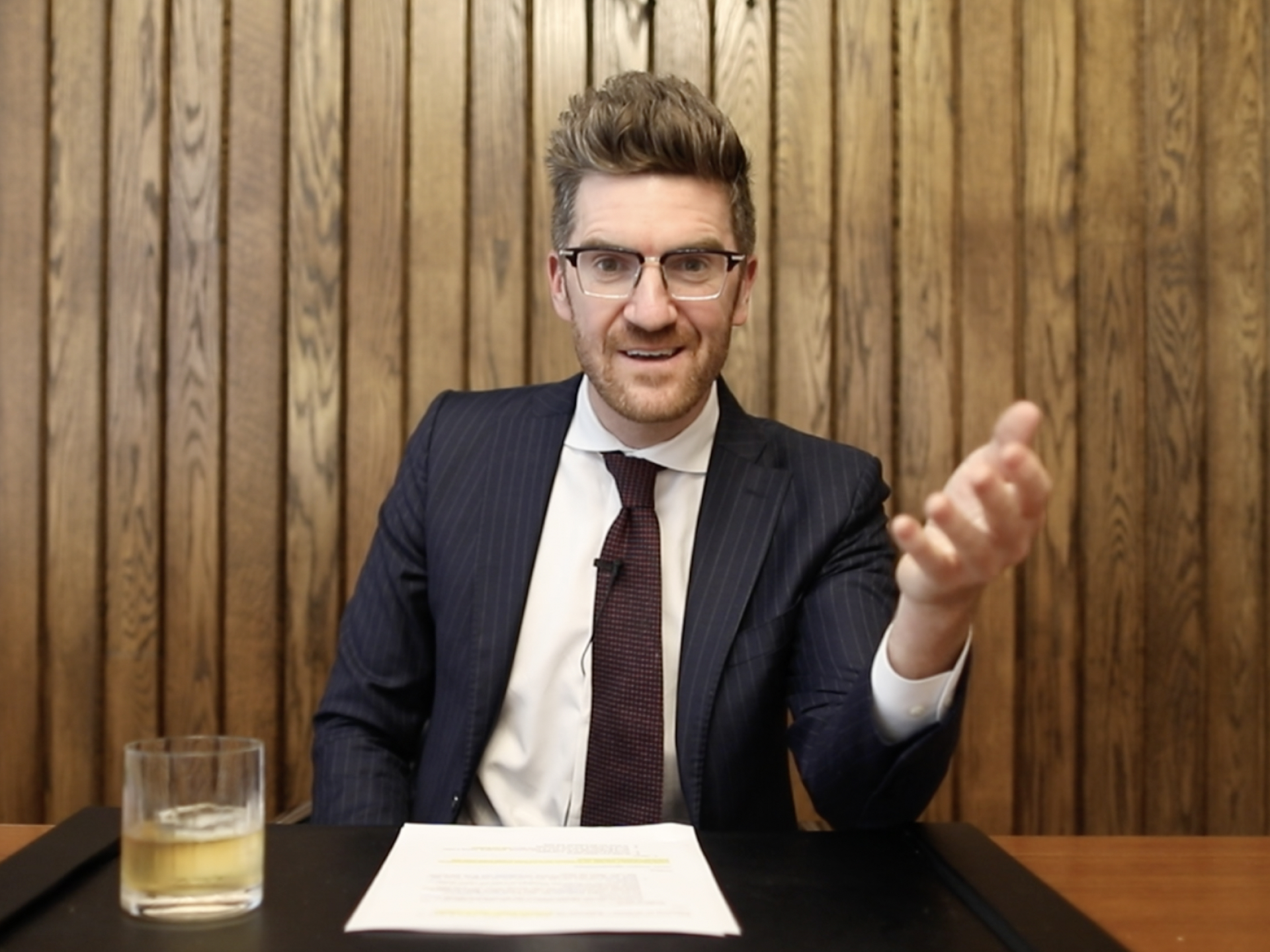 Welcome to Negronis with Nord. Today’s episode covers the ins and outs of pitching. You can submit your questions for future episodes here.

The bourbon is spicy

James: Welcome Negronis with Nord episode number 19. You might say James, you aren't drinking a negroni. That is true. I am drinking a actually very lovely bourbon sent to me from Chris Keaton. Look, I've been asking y'all to send me booze. Chris answered the call, sent this through. I appreciate it. We're going old school. This is like a Drink with James throwback drinking drinking bourbon and doing this and the bourbon spicy. And maybe, maybe we'll get a little spicy today. We just had our black tie party. Recently. We haven't had it in two years. Fantastic. Having 200 clients influencers our staff together in black tie. I got a new tuxedo made, moving me into the four tuxedo club, which is a very exclusive group. It's not like it's difficult to get into it. You just have to, you just have to pay for it. But I got a beautiful white dinner jacket. Of course I like I woke up the next morning and like both arms were covered in foundation from hugging people all night.

So it is, seems like it's going to be a dry clean it every time you use it, but it was lovely to have everyone together. Again, get out on the dance floor. Look, I was concerned. We were gonna have a little bit of a super spreader, but I think all signs point to the fact that we were safe. It was all good. And nobody got COVID at our party. So double win there. As y'all know, Tim, after six years of working at Fohr has moved on to pursue other opportunities. We are obviously still doing the show, Tim wasn't the one sitting behind the desk. He was sitting behind the camera. We now have Haley who is running her first episode ever end to end. So as you sit at your computer, give Haley a round applause cause she didn't sign up to be the cameraman for this for this show.

Why you should pitch to brands to stand out

James: And someone said, they're curious if we could touch on key marketing points, moments for brands year to year. That way as creators we'll know, to pitch a little more and potentially expect more partnerships. One I love when we get questions about pitching, because almost nobody pitches. We talk to brands about this all the time, and I'm always shocked how little inbound, thoughtful inbound, okay.

I'm gonna caveat thoughtful inbound. They get from influencers, DMing a brand saying "collab?" question mark. That is not pitching them okay. That I don't think has ever worked. It will not work. Never do that. Thoughtful pitches are something that brands don't get. It is an easy way to differentiate yourself. And you know, here we, we live by this kind of mantra for, you know, we tell our clients don't spend good money on fake love, right? The best partnerships that we have done are always the ones that the creators are the most passionate about. It's what makes Sephora Squad so great is that we get tens of thousands of applications. We get to pick the people who are the most passionate, most crazed, most into Sephora to be part of the squad. And that makes the partnership and the, the sponsored posts and everything they do just better.

And it's a lot more fun for everyone. So brands absolutely want to work with people that love their brand. It is always better if we can work with somebody that is an existing customer and is somebody that loves the brand. So it's something that the industry wants. As a brand, they're not getting many influencers pitching them.

Who you could pitch to

James: One of the things that I think is, is misunderstood and so interesting is that any brand you wanna work with, you know, think of your dream brand, the dream partnership, you getting that partnership is like one person, right? So we think of these companies as these like huge organizations and they are Sephora, for instance, has tens of thousands of employees, but they have a team of 10 that runs influencer marketing. Every brand is like that. What is standing between you working with them is generally just connecting with one person.

And if you think about it that way, it becomes much less intimidating. Nike as an organization is this huge monolith and it's intimidating and it 'little old me, what could I do with Nike?' But you could go to LinkedIn and let's say, it's Nike running. And you find the person that is doing influencer marketing at Nike running. If you can't find that, go to PR or general like marketing and just send them a message, ideally not on LinkedIn because those don't work as well. I just find that getting into the email is is better. Another way to get those contacts is you've got a crew of influencers that, you know, if your friend just worked with Nike and you wanna work with Nike, just ask them, say, Hey, could, could you introduce me is best, right? Because that's going to get a response. If they're not willing to introduce you, then just ask them for that email address.

How to pitch to brands

James: When you go to pitch a brand, the best thing you can do is show that you've worked with them before. We just did a mental health webinar with Jess Kirby. And I love this story that Jess, you know, had wanted to work with Barbour for years. You know, when she went to pitch them, she actually used a tool on our site. So if you can pull these reports that you can send to brands that will pull in every time you've mentioned a certain brand or word. So she sent a note to Barbour, this report of 30 posts that she had tagged them in over the last few years, right. For a brand. I mean, what an incredible thing to see that like, again, this person is already talking about us. They're already a customer. Their audience is already familiar with the brand. It's a literally a dream scenario.

So the best thing you can do is send examples of when you've talked about the brand in the past, it doesn't have to be pulled into a specific report. It could just, you know, send them a, a link to one post if that's all you have. But just show that that you're already invested in the relationship that you have some skin in the game.

When to pitch to brands

James: The question was specifically about cultural events, right? Holiday back to school. Mother's day father's day. There are a number of kind of tent pole moments in any brands, marketing calendar. If you're pitching around those events specifically, I think it's good to understand just how far out these things are planned. I would say our average sales cycle at four is about eight weeks, six to eight weeks. So a brand will reach out saying, Hey, we're interested in potentially working with you on a campaign six to eight weeks later.

We'll close that campaign four to eight weeks after that will have content go live generally. All right. So you're talking about at least three months before a post goes live is when a brand is really thinking about it and allocating budget. I would say you wanna reach out at least three months, if not more like four to six months in advance, these budgets are set early. I would start thinking about pitching holiday. Now I'd say it's a little early now, but I would start thinking about it. And I would probably send that out in August. I would say we close most of our holiday deals in September, October at the latest. So it's probably a little earlier than you are thinking, but it's good to make, map that out and think about your year. If you wanna go to Coachella and you want Lacoste to pay for it, then six months before Coachella, like have that on your calendar, right?

If you really wanna work with Amazon for holiday, then make sure that August, September you're, you've got that pitch ready in closing a few things about pitching one, not enough people do it two because not many people do it by doing it. You're going to absolutely set yourself apart and make an impact. Three, the brand you wanna work with is just a person. It's just a person at that brand that you need to convince that you are the best person to work with. And that your idea is the one that they should be doing. Four. If you can prove that you're invested in the partnership by sending past posts or proving your affinity and love for the brand. If you're already a customer showing that is incredibly helpful and five, make sure you are working within the corporate structure pitch four to six months ahead of the date. If you want to make sure that you can allocate some of that budget towards your idea. I think understanding those five things will really help you in pitching brands.

If you have any other questions on how to pitch or anything else, please ask us as always, we don't do these videos for our health. We do 'em for you. So please like subscribe, share. Tell your friends about it. Ask questions in the comments, send a note on our Instagram or email haley@fohr.co. As always. And we will answer your questions. Thank you. I'll see you next week.