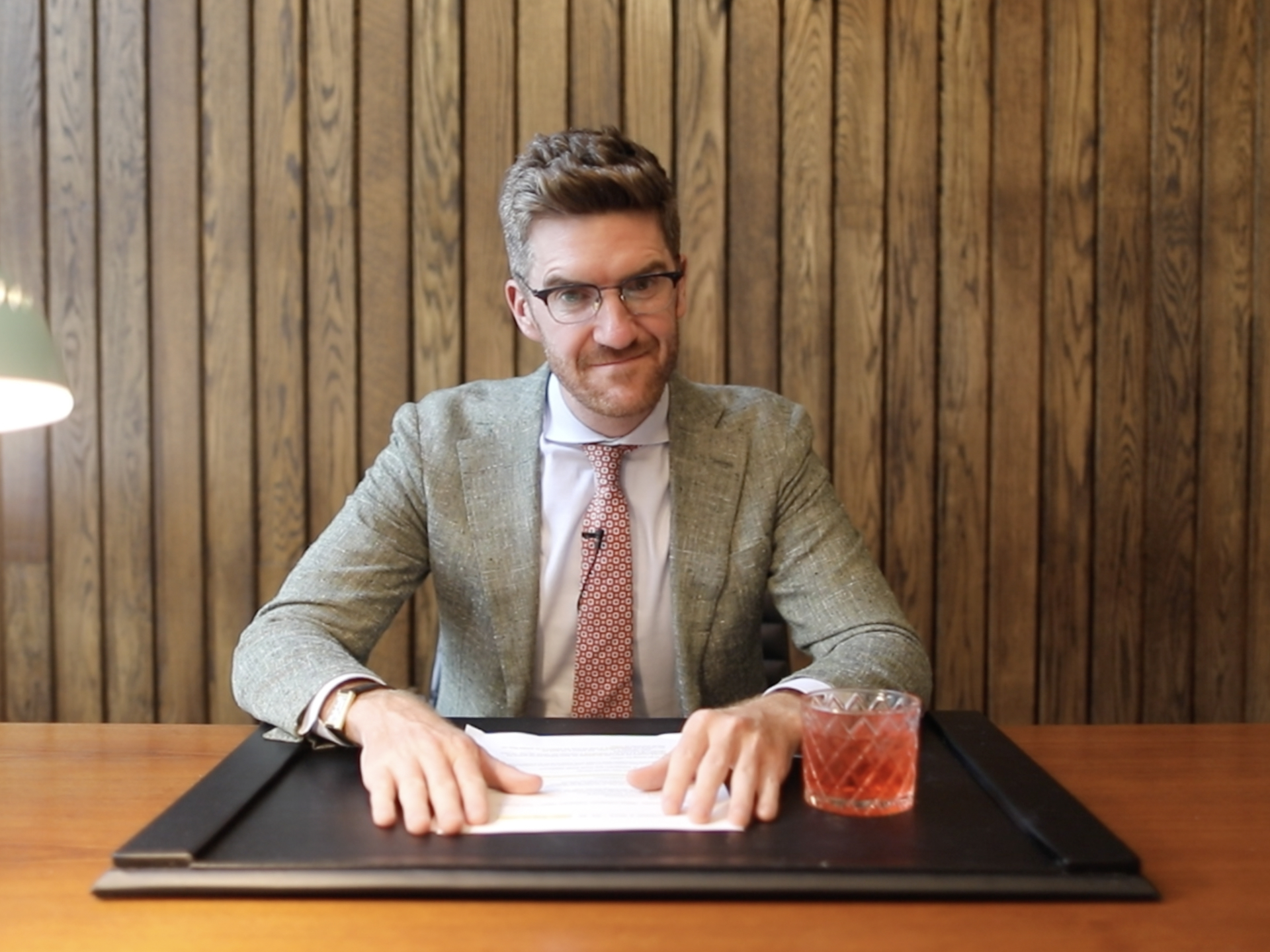 Welcome to Negronis with Nord. Today’s episode is about the recent Instagram backlash, formed with the tagline, ‘Make Instagram Instagram Again.’ We address the frustration from both sides. You can submit your questions for future episodes here.

Someone send James some St. Tropez. He doesn't tan.

James: Welcome Negronis with Nord episode number 26. I am back from France. I do not have a tan, well, one I've never actually gotten a tan I'm Swedish. It doesn't really happen, but also it was a hundred degrees every day there. And so going out in the sun was more of a like Dracula moment than anything else for me where it was like instantly started to boil. I am back. I am excited to be back in the chair.

Instagram had like a full ******* meltdown while I was in France. I figured we should start by talking about that. Obviously, as I predicted and said over and over and over again, Instagram said, yes, we are going to start deemphasizing content from your, the people you follow in favor of things from people you don't follow. Currently, the mix was at about 15% and they looked to double that over the next year or so. It's pretty dramatic. And the backlash was also quite dramatic.

James: I saw a lot of people I follow posting about make Instagram, Instagram again, you know, they felt it was unfair what Instagram was doing, that they didn't want it to be like TikTok. Eventually Instagram rolled those changes back. At least for the meantime, Instagram rolled the changes back for the meantime, they probably will just roll it out anyway and not ******* talk about it, which is probably what will end up happening because they don't have to tell you what they do with the algorithm. What can we learn from this one? I think it was encouraging to see that when enough creators and general users of the platform spoke their mind and said that they were concerned and upset about the direction Instagram was going, that Instagram did listen and walk, those changes back. So I think that it is another example of just how powerful y'all's voices can be and how you have to stick up for and fight for and what you believe to be right both inside of Instagram as a platform, but generally in the world.

"I think it was encouraging to see that when enough creators and general users of the platform spoke their mind and said that they were concerned and upset about the direction Instagram was going, that Instagram did listen and walk, those changes back." - James Nord

We've seen that and learned it time and time again, over the last few years of just how much of an impact influencers can have when they come together.

James: Ultimately, I think the problem with Instagram right now is that they have absolutely no vision for what they want the app to be. Adam seems like a great guy, obviously super smart. I don't think he has a clear vision that he could articulate on what he wants Instagram to be. I think mark Zuckerberg wants Instagram to be a platform that can drive billions and billions of dollars of ad revenue and thus deliver value to their shareholders. A business needs to have a clear vision on where it's going and how it is going to get there. And it is abundantly clear that Instagram has lost that focus, getting rid of the founders and pushing them out has kind of ripped out some of the soul of what Instagram was supposed to be, be.

It is being relentlessly monetized at the expense of its users, both casual and professional. And it's really sad. You know, I think that they're blowing a huge lead. I think that they feel like the only way to compete with TikTok is to be TikTok. You know, I'm reminded of this great story I heard from, from Sid Mashburn's menswear designer. He used to be like the head menswear designer at Ralph Lauren. He's telling the story about, he was talking to Ralph and it's the nineties and Hugo Boss is just beating the **** out of Ralph Lauren. They, he got the black suit, you know, the skinny lapel black suit with the skinny tie. And that was the look he's telling Ralph, look, we need to respond to this, right? Like we're getting ******* crushed out here and we need to do something about it.

Ralph was just like, look, Hugo Boss is having their moment right now. And that's great and they're doing their thing and we're gonna keep doing our thing. It will swing back to us. But like, all we can be is ourselves. Without Instagram and their executive team being able to clearly identify what Instagram is, we are going to be jerked around and forced to create all new types of content.

Instagram algorithm is pushing Reels, for the time being

James: I am not really one to complain about the algorithm I have for years said, look, it's not the algorithm. It's your content. It is clear that it is almost impossible to get a still image post to do well on this platform right now, it is almost ******* laughable. And what they're trying to do is make Reels do so well that people get excited about making reels. It's exciting when something does well. And so they're trying to, to get it from this place of like, eh, I don't wanna make a Reel to like you make a Reel and it goes viral or whatever. And you're like, 'oh ****, this was kind of fun. I should make more reels.' That's the mental shift.

Instagram is pushing, they're ruining the ***** platform, doing it in this way. That like, I honestly cannot really understand. And again, I, I, I think unfortunately it comes from a, a lack of clear leadership in the platform. I think a complete disregard for their creator community. And so I encourage y'all to keep speaking your mind. This is not the last thing Instagram's gonna do to ***** with your money. Okay. Just wait until they launch a marketplace targeted at dramatically, driving down the prices that influencers charge for sponsored posts, because that'll be the next thing is that they're going to let brands start buying posts directly from influencers. And they're going to build that tool in such a way that the lowest price gets the deal. Hence probably driving influencer pricing down two or three X of where it is right now, if they're successful.

The next move for creators? Focus on what you do best.

James: So like that's the next move? I was looking at posts from my friend, Jamie Beck. Who's a obviously incredibly talented photographer we've had on the show. We can link to her episode. And Jamie was like, look, I'm a photographer. I take photos. I don't want to ***** shoot video. I don't want to make Reels. I don't want to edit video. I take photos. I shouldn't be punished for that. I hate shooting video. I hate editing video. I will sit here in front of the camera because I like attention. I understand that. Like, if you are used to storytelling through photos, as I am switching to, to video is really hard. Unfortunately, they are going to will that future into existence. And so while I commiserate with people saying, look, I'm a photographer.

Why can't we just take photos? Like why does Instagram have to be like TikTok? It is very clearly where they are going. And because there isn't a strong founder leader left in Instagram to push back against mark Zuckerberg or whatever, the, the powers that be at Facebook want, there's nothing to be done. It's just going to happen. And unfortunately, we're back to what I have said in past videos is that you either have to adapt or die. Probably an example I, I use often is, you know, imagine you're the rolling stones in the late seventies. And you're the biggest musical act in the world. Maybe the best rock band that has ever existed. And then in the early eighties, rap comes out and everyone wants to listen to hip hop and rap. What can you do? Right? The rolling stones, can't become a rap band.

You know, they just focused on what they did. They're still one of the highest grossing rock bands in the world. Their tour is still making them an unbelievable amount of money. They haven't tried to chase relevance or fame, you know, they just do their thing. I think the comp for influencers is really focusing on your community, not chasing virality, not chasing all of those things, but if you've built a community focus on that, if you're really good at something, focus on that. Yes, I do think you should be trying to think about how your content makes sense with video. I think you should be experimenting with that and learning that skill because no matter what, like that is where the world is going. So if you want to be a content creator, I don't see a world without video. It's okay. If you don't wanna do that anymore.

And you're like me and I, and you just want to like take photos and publish 'em. If they get 83 likes, **** it. You don't really care because like the joy comes from creating and sharing, not from validation and likes, but if this is your business, if you want it to be your business, if you aren't grow, you're following the platforms, can't make it anymore clear that it's gonna be all about video. It's gonna be all about virality. It's not even gonna be about growing a following, but it's going to be about chasing trends, tapping into the algorithm, getting onto people's For You page or onto the Explore page. And ultimately that's what social's going to become about. So that is the future. We are staring down sucks. We can complain about it. We can delay it, but ultimately Adam's not gonna stop it. Mark's not gonna stop it. We may have delayed it for a couple of months, but Instagram has, has made themselves incredibly clear, keep making some noise. You know, ultimately we all have to continue to evolve and grow to to survive in this ever changing world. And I wish you all the best of luck.

And obviously I will be here with a Negroni every week to offer whatever pitance, of, of advice and information I can to help you along that journey. I wish you well, it's nice to be back and we'll see you next week.