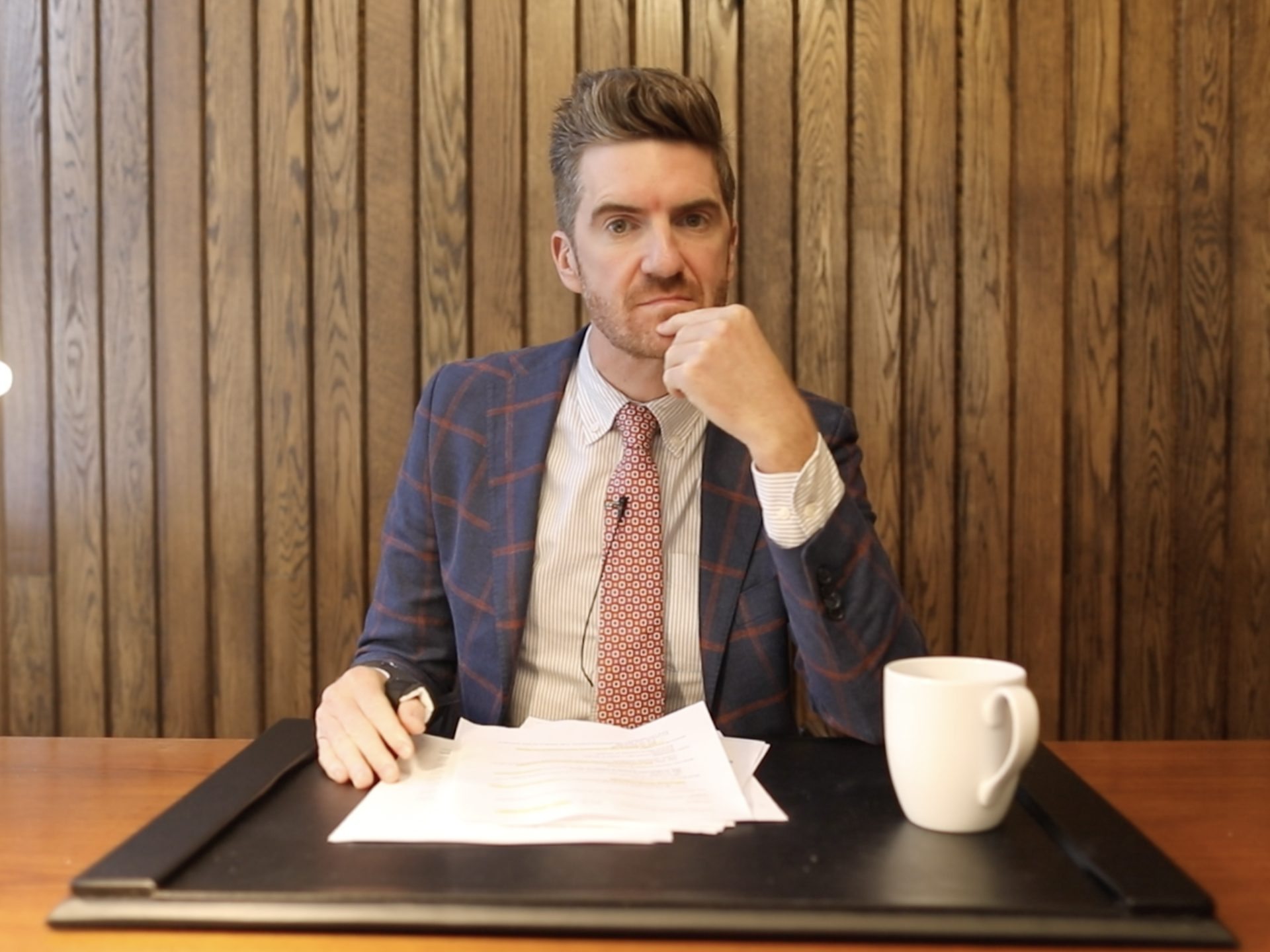 Welcome to Negronis with Nord. Today’s episode is about a 41% decrease in TikTok accounts with +1M followers year over year. If TikTok follower growth is slowing down, what does that mean for creators? Plus, James’ not-so-subtle thoughts on BeReal. You can submit your questions for future episodes here.

James: Welcome. Negronis with Nord episode number 27. It is 10 in the morning. We're drinking coffee, not alcohol if you'll excuse me. We were gonna film yesterday, but it was 96 degrees. And the HVAC in our office was fighting for its g***** life. It is nice and cool in here. So I am excited to get into this.

James: Now, before we get going, I wanna talk about a couple of things. I saw a stat yesterday showing the number of new TikTok accounts crossing a million followers is down 41% year over year, 41% less accounts currently crossing over a million followers as were the same time period. Last year, I think that's telling us a few things. I think the period of like easy growth on TikTok has been closing and is starting to probably come to an end. It's just harder and harder to get attention. My fear, the plan for these platforms is that you follow the algorithm, not the creators which is a huge ******* problem for influencers.

If the platforms succeed in training people to follow the algorithm and the suggestions and not individuals, it is going to be much, much harder. What is going to happen is that follower accounts are gonna be way down, right? We, as an industry might have to completely rethink how we are pricing things; move away from follower accounts to average views, you have a hundred thousand TikTok followers. You get 5,000 views average on each video, we currently price off of your hundred thousand followers. That's how the industry works. We might have to move towards pricing off of your average view count. Same for Instagram, half a million followers on Instagram, 75,000 of them see your content. If the industry moves towards pricing off of those average views, it will make it more difficult for people that have consistently lower views. It will make it more difficult for people who have pretty lumpy views on TikTok, you know, that are, are, are kind of chasing virality more.

It is definitely going to complicate things for creators for the influencer space in general. It's fine. There is only growth ahead of us as we look at the space in general and ultimately that growth in the industry will be a good thing for creators. I am just increasingly concerned about the next three years and what is going to happen to the price creators can charge for posts.

James: Said it a hundred times, I'm just gonna keep saying it. If you're TikTok first, especially you need to diversify, you know, you need to diversify. You need to move that following somewhere else. If TikTok keeps operating in this way, it can end up looking more like Twitter, a platform where you're following can get you a huge amount of social clout. It can get you access to opportunities. It cannot get you money. Nobody can make money on Twitter, a worthless platform. If you're trying to monetize your actual content, Twitter operates in a similar way where people want to log into Twitter and see the most popular **** on Twitter. At that time, they want to kind of get a bird's eye view of what's going on in culture and news and all these things. That appears to be the space that TikTok is trying to take over. Instead of tweets doing it with videos. That is very bad for creators. That's very bad.

We want an Instagram-type model where you follow people, you build a community, you have access to that community. You know, people are coming to the app to learn about new products, to learn about new places, to travel, to learn about, you know, new ways to put their makeup on. Like that is where we can make real money moving into an entertainment, competitive entertainment space, where the most outlandish, the most ridiculous the, the funniest content is the stuff that is seen. Catastrophic.

Keep your eye on this. I think if you are focused on TikTok, which you absolutely should be, you know, really try and focus on consistent viewership, driving consistent viewership, building a community, not chasing virality, but building a community. You know, we've done a bunch of episodes about diversifying your following. You know, Donye did a, a whole segment on it, go back and watch an episode with Grace Atwood. She has done an amazing job of building a business independent of the social platforms and one that if those platforms close tomorrow, she'd still be able to operate. These are things that, as a creator, you need to think about if you are hoping to have a career long-term, and you're not just chasing some momentary virality, some, you know, little flash in the pan of fame. But you want to do this for years or for decades.

You need to think about how you are gonna make that happen, how you can make sure you have ownership over that community. And you're not beholden to the whims of TikTok, which is very clearly saying the algorithm is more important than the creator.

BONUS CONTENT: What BeReal Is (and Isn't) in the Realm of Social Media

James: Speaking about TikTok and the future of social. We've been getting some questions about, BeReal. Anytime there's a new platform, there are a bunch of articles that get written about is this the future of social, right? People are sick of how polished social is. And, and you know, the idea of be real is appealing to show like your unfiltered self, right? And I think a lot of its success makes sense. Making Reel or TikTok takes a long *** time putting together an Instagram post, even a still, that's not a video that's gonna do well, takes a long time to get that right.

And the idea of just, you know, very quickly being able to snap a photo in the moment post it don't filter it. Don't edit it. Don't storyboard it out. Don't have to re-shoot it. 10 times don't have to shoot it on the pro camera, put it on your computer, edit it, transfer it back to the phone, throw another filter on it, post it. It's understandable that people are having fun, being more spontaneous, creating content without a huge amount of effort. That part really makes sense. Do I think it is indicative of a larger shift in social media? Absolutely not. While the desire for people to be connected to friends, to see authentic content from people they care about that is important. And that is a motivator. I would argue it is not as big of a motivator as getting famous as making money, notoriety recognition and validation.

That is the allure of TikTok and Instagram, you know, is not that this is a better way to connect with your friends, but that if you get a following your life changes. Like literally your life can just dramatically change. If you have a couple hundred thousand followers on Instagram, you can quit your job being creative and creating content. And even if you're not working as an influencer and you have that following, it's gonna open you up to a huge amount of opportunities that you wouldn't have. You'd be getting gifts from brands. You'll be getting invited to events. Even if you stay in the corporate world, you'll, it'll be easier to get bigger jobs, right? It's a, it's a huge validation, the motivation and the desire to build that following. And what it means for people is so strong that something like BeReal is never going to become the norm in social media.

I think of it like Wordle, you know, Wordle was this little viral phenomenon. It brought people together. It was something you only had to do once a day. It was, it was low stakes. It was kind of easy, but it was fun. It felt like exciting. I'm old enough to remember that stupid trivia game HQ trivia HQ that had that like one host, right? And everyone was like, oh my God, this is the future of entertainment. This is the future of game shows like this is where everything's going. It's a little toy. And, and when you get a new toy, it's really exciting. And three months later, that toy isn't super exciting anymore. And unfortunately that is what be real is it's a toy. It's a fun one. I think you should play with it. It's an interesting new way for your audience to engage with you for brands.

You know, I think there's some fun stuff that you could do on there in the short-term. Just like Clubhouse, just like dispo, just like all of these things, not massively culturally important. And they're probably not worth an enormous amount of your time. You know, 3 million people a day use BeReal over a billion people a day, use Instagram and TikTok. Now Instagram and TikTok at some point had 3 million users as well. Even with TikTok early on, you knew it was going to be big. You knew it was going to be a real player. And that's something that for BeReal. I just don't, I don't believe that.

All right. I appreciate that. We are gonna start talking about holiday. It is coming up. It is the most important time for brands. Vast majority of their sales happen in Q4. That means a lot of their advertising spend happens in Q4. It is a really busy time for influencers. It is worth you planning and thinking about it and talking about pricing and all of that. We're gonna talk about it next week. If you have questions about holidays specifically, please drop them in. And we will answer all of your burning holiday questions then. Thank you so much. We'll see you next week.