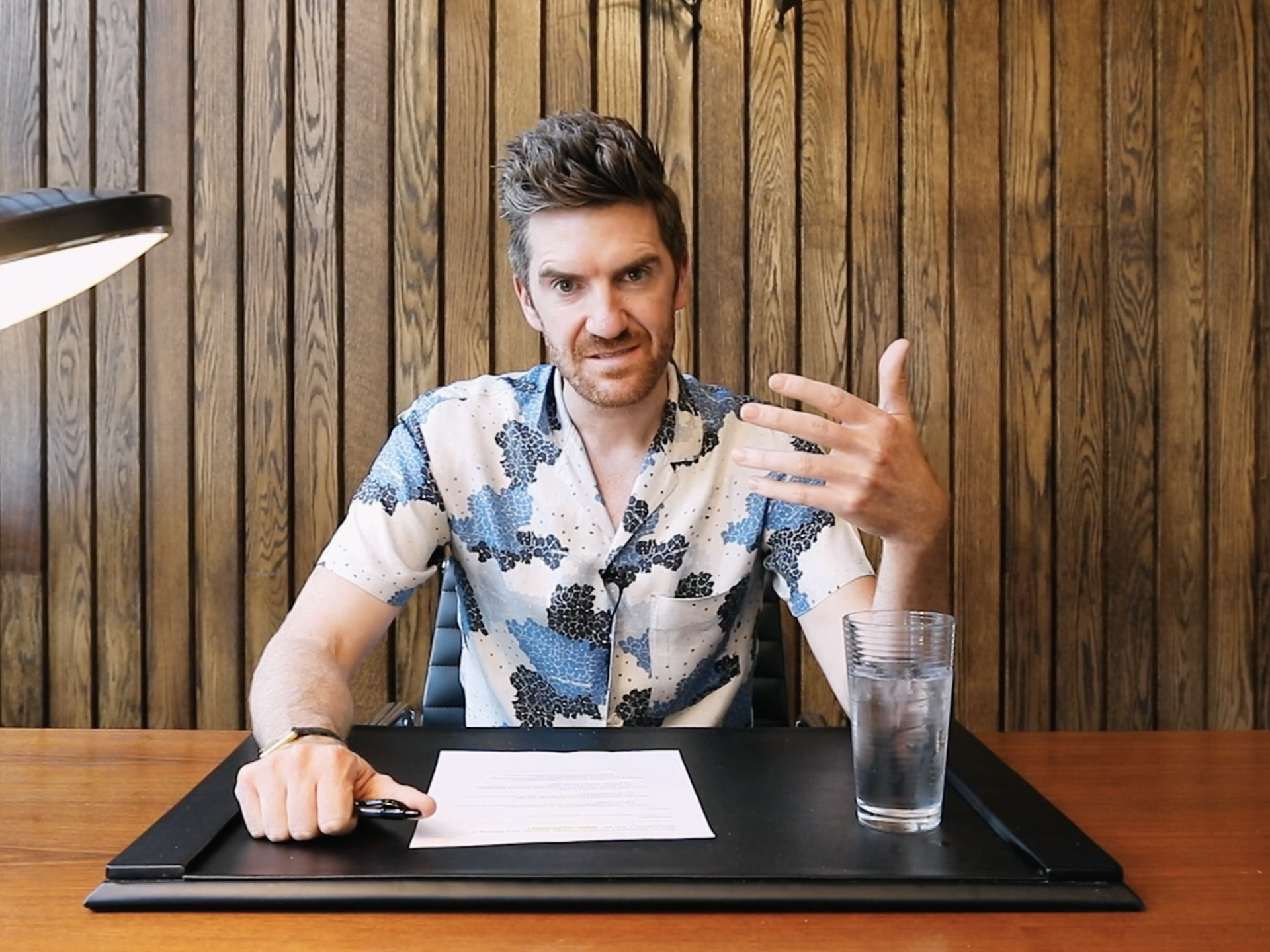 Welcome to Negronis with Nord. Today’s episode is about how to actually enjoy video content creation and approaching video with a student mentality. You can submit your questions for future episodes here.

James: Welcome Negronis with Nord episode 25. There's something in my eye.

Obviously I'm drinking water today, which is rare for me on a lot of, for a lot of reasons. I don't drink a lot of just like mainline water. I'm like mostly drinking LaCroix or Negronis, but ah, it is 95 degrees in New York and I'm supposed to be racing my bike in about an hour and a half. And unfortunately, Campari is not a great way to hydrate before a bike race. So water it is, I am also headed to Provence on Friday for a week with my family and we will be skipping a week. So Negronis with Nord will be having a vacation alongside of me, but don't worry. I will be there. I would say I'll be there doing research for you, but I will be there drinking wine and enjoying the French countryside. So I'm hoped to come back with some insights into at least if nothing else, some interesting new Provencal wines that you could involve yourself in moving on to today's show.

James: Last week we were talking to Sophie about TikTok. Is it going to ruin social? Is it not? We discuss all of these things and more, if you haven't seen that episode, you should go check it out. We've talked a good amount about video, and it's pretty obvious that video is set to become the dominant form of content on social, but I'm not sure across the board that a lot of influencers that had started either with blogs or Instagram, when it was when imagery, photos were the dominant form of media. I'm not sure that we have fully understood how kind of big of a shift this is. You know, if you go back to like, you know, the 1920s and you look at like silent film stars, most of them couldn't make the jump. When the talkies came out, the biggest silent film stars in the world did not become the biggest movie stars in the world.

Their craft, this thing that they got really good at acting in a silent movie was fundamentally different than acting in a voiced movie. There was nothing they could do to really prepare for that shift.

Now, I'm not saying this to say that people that built their audience on photos, can't transition that audience and their content to video. I am saying that I think it is harder than a lot of people are giving credit for like right now on Instagram and TikTok. The algorithms are what's the word I'm looking for. The algorithms are being really supportive right now, especially of kind of legacy influencers who are making the transition into video, right? The Instagram algorithm is absolutely favoring those posts. They're trying to get people views. They're trying to kind of say like, Hey, it's cool. Like this shift can actually be exciting and fun and oh, look, you put up a video and it got 3 million views and went viral.

That's kind of cool. Right? So they're helping this shift happen, but they're only gonna do that for so long. Once there's a level of video happening on the platform that they're comfortable with, the algorithm will just work like normal. And I think that people will find performance much harder to capture than it is right now. And I think for influencers who came up, thinking photo, photo, photo, or photo caption who are now making this switch to video, I really think that like, yes, you should be out there creating content. That's the best way to learn.

BONUS CONTENT: Video Tips: How to Both Capture Attention, and Hold It

James: My buddy Grace Atwood who's been on the show a number of times in past iterations of its name, you know, is just kind of making the jump into TikTok. It's not natural or endemic for her. She's been open about that. She hired a young kid to help her, but she's committed to, to doing 14 days in a row of TikToks.

I think that's great. I've always said, setting up challenges for yourself, setting up some structure, letting yourself play like this is the best way to learn. If you haven't done that, you absolutely should be setting these little goals for yourself. These ways to kind of understand that you're getting better. But if you have been putting shit on the internet for 10 years, let's say right. And what you've been putting on the internet are photos with captions. You've got 10 years of experience and knowledge and knowhow doing that. And you're jumping into video, which you've never shot edited. You don't understand necessarily. And I think that we can also approach it with more of a student's mindset. I'm seeing a lot of, again, influencers that are used to posting photos be really like upset. Oh, I gotta do talks. And I gotta do reels and blah, blah, blah, and all of this stuff.

And I think a lot of people don't enjoy making videos. The issue is that like, what happens if you don't enjoy making content is your content is joyless. And if your content is joyless, it's not really fun to engage with. And again, if you think about what it was like and how exciting it was when you, you know, when you got a new camera and you started to really learn how to shoot, and you just wanted to go take photos of everything and you wanted to, you know, you saw photos that you wanted to try and replicate, and you had those, you know, those shoots that would come back and you'd see the imagery and you were so excited and excited to share it with your audience. Like you have to get into that mindset. If you want video to be a big part of your content strategy.

James: I think as an influencer, you have to get into that mindset where you are excited about it. And it is something that brings you joy or there's, it just is not going to be sustainable. And I think if you're excited about it, if it's something you can get passionate about and you can take that kind of student mentality, you know, different editing techniques, also just trying to understand, like, what is it that makes a compelling video in your notes app, keep a section. You can literally copy and paste in the link to a TikTok or a Reel that you like and just write down what you think made it compelling. What did you like about it? What do you want to steal from it? What do you want to try and replicate and just start to make this folder of things that you liked. And I think you'll start to understand, I feel like all these videos that I'm watching, they have the first five seconds.

I don't know where the video's gonna go. Right. And then it's kind of like this reveal of what the video's about. If you see that like, oh, this week I saved 10 videos that did that, then you're giving yourself like a structural, creative prompt to say, okay, I've been enjoying videos that do this. What could I do? How could I take my daily outfit video I'm going to do? And in the first five seconds, create that feeling of unease where you don't know where it's gonna go, but you're excited to see where it's gonna go. Right? As you kind of pull out trends that are consistent across a number of videos that you like, oh, I really like fast-paced, editing, you know, quick cuts. That's something I find myself really enjoying. Then, then you get to like, think about that. And I do think with video is you generally do have to be, what's the word I'm looking for.

You have to be more intentional. You can be shooting in New York and you can just kind of walk around with the camera and see what comes back. But I think with video, it does help to be a little more intentional and have a clear idea when you're shooting about what you're gonna edit, what you need, how that video is going to work. And so allow yourself to not be annoyed by it, not be annoyed that you have to learn this whole new medium, but to try and be inspired by it and get back into that beginner's mindset. The, the one you had, when, you know, before you had a following before you were making money on this before you were pissed off about the algorithm, or, you know, were worried about creator burnout or all those things, we need to go back to that really special place where we are passionate and excited. And it is the creation of content itself that is bringing us.

It is the creation of the content itself that is bringing us joy and satisfaction, not what we're getting from that, be it affirmation through likes or brand deals, money, trips, clothes, whatever that might be. You gotta like strip it down and lean in and like it, and look, you're going to kind of suck at it to begin with. You're not gonna be as good as the people who started on TikTok and maybe have never had a photo based social network that they've been good at. And that's okay. Yeah. They have a headstart on you. Like, they're better at this than you, but again, you can get into that mindset. You can be okay with being a beginner and, and let yourself really invest in this and try and figure it out because TikTok Instagram, whatever platform ends up being dominant, it is clear. There is no future of social without video and the ability to create compelling short-form video that grabs people's attention is going to be a, a skill that you just need to build.

"It is the creation of the content itself that is bringing us joy and satisfaction, not what we're getting from that, be it affirmation through likes or brand deals, money, trips, clothes, whatever that might be." - James Nord

If you want to continue to have a career in this space, because if you think it's hard now, just wait till five years is from now. It is going to be exponentially harder to be successful. The quality level is going to be so much higher and you're still early and there's still time to figure this out. Just encourage you to approach it with passion and curiosity and optimism that you can get there.

With that, I am gonna go race my bike and then go to France and I will see y'all when we get back as always, please send some questions in and we'll catch you in a couple weeks, cheers until then continue to send your questions in like, and subscribe. And we will see you next week.